Pre-Meet in Mt. Vernon @ 10:00. A rare show of Subarus gather onto what they say is a typical drive. From driving over 2’ boulders to the entrance of Walker Valley Offroad Park with weather conditions consisting of snow, ice, rain, and pathways mostly mud and water bed crossings; the group made it through OK with only minor body damage and a broken headlight, snapped rear axles, and a bent rear hub. 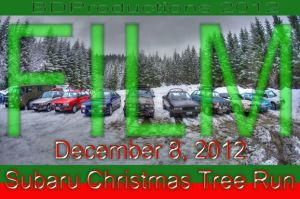 The Annual Christmas Tree Run to Mt. Rainier went really well. We had folks from all over Washington State and Oregon participate with around 23 cars including Jeeps, 4Runners, DL EA82, EA81, Loyales, GLs, a Brat, 2.5rs, WRX, Legacy, Forrester and even a Austrian 1970 Pinzauer!

We met in Enumclaw, Washington at the McDonald at 09:00 and arrived at base camp at around 10:30-11:00. The organizers had already been there setting up the tent and starting a fire for the food. Many of us played around in the camp with our Subarus, Children played on the small hills with their sleds and a few of us drove up to look for a Christmas Tree. I personally had to unload my spare 5spd dual range transmission with a spare rear lsd to make my load lighter so I set it on a tarp at basecamp. There were many people on the mountain including big trucks. Some of them got stuck so it slowed down our travels. Many of us were equipped with ham radios, cbs and frs’ so communication wasn’t an issue. Overall, there were no dramas, we got down the mountain safely and one couple from Moses Lake ended up staying the night at basecamp while the rest of us headed home.

This annual Christmas tree run meet started around 12 years ago from a group of guys on the USMB. (Ultimate Subaru Message Board). It has continued over the years with some great turns outs. Families, children, guys and gals all welcomed. The last time I joined was in 2006 and road in the back seat of a Subaru Brat to film and take pictures. This year I drove in style with an 84′ Subaru GL Hatch. Thanks to Grant for the dash cam video footage and to everyone who participated into making this short film happen.

A group of Enthusiasts in Athens Greece enjoying life.

A 600km tour in a 2001 Subaru WRX wagon to Transfăgărășan Highway in Romania. According to Top Gear BBC, it is the greatest driving road in the world. Ref: /watch?v=OLAtcrB0GZg