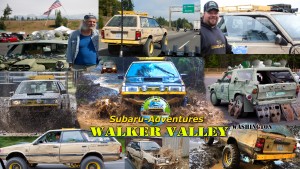 Todd has seen a lot of Subarus in his lifetime among many other pioneers of the NW including Scott with SJR Lift Kits, Qman, Zap, Turbone, Tex, Scoobyclimbs, Zefy, Nathaniel, Woody, Brian, Pat, David, and Mudrat from the Ultimate Subaru Message Board days. Todd has literally owned hundreds of them. His neighbor Jeff Pearson of the NW Washington Offroad Subaru Club has owned 103 Subarus as of last year. Over twenty years ago, Todd, Jeff and the crew were buying Subarus and purchasing imported engines and turning around older Subarus for a hobby to be able to take them to Skagit’s Walker Valley Offroad Park. In the mid 2000s, Jeff and his friend Yohn went as far as building their own Subaru lift kits to build the NW WASHINGTON OFFROAD Subaru Club. That would be the stipulation according to Jeff. They would try to get people involved. They could knock out ten 2” lift kits in an hour. Jeff would give away a lift kit annually for them to go wheeling at Walker Valley Offroad Park. The lift kit they named was Jaw Lifts at the time.

Todd talks about his first Subaru Brat. A guy had given it to him. Todd was not into rice grinders and so he took it to the woods at Walker Valley and Evans creek near Mt. Rainier to test its capabilities. They ran it for two weeks straight and were unable to break it with full throttle or slamming on the brakes. After he had returned, it was then he decided to keep it and continue the Subaru journey. Without exaggerating, he drove it on a dry river bed over rocks the size of basket balls while the floor was heaving from driving over them and it kept going. Good things take time as Todd would put it.

Jeff’s first Subaru was a 1981 Subaru Hatchback 2 wheel-drive. He jumped it around 21 times out in his backyard in Skagit Valley and it simply would not die. At that point he was sold on it and it took off from there.

One of the good things with Walker Valley Offroad Park is there was a gate across the road at the entrance. They had it set up so regular cars can’t get up there and get in trouble.

It’s kind of a poor man’s wheeling crew so to speak. You can buy the tires off craigslist for $150 and everything else that you put into it. Everything is either built by yourself or somebody else in the group. Everyone has what they are capable of doing and having all sustained cars to be able to wheel.

There are a lot of people who say that it is cool and would like to do it. Jeff would then explain to them all that he has modified and all the work that goes into it. Without doubt it is hard on the rig. Jeff has lost count of all the hours at Walker Valley Offroad Park. A lot of it is wheeling and a lot of it is being broken down. Sometimes they break a control arm or a stub axle. Whatever the case is, everyone bands together. You’ll either get it fixed or you’ll be dragged out of the woods. It’s kind of that no man left behind thing. When returning to the parking lot at Walker Valley, it is a relief that half the battle is over just driving to the park. The real battles is when you get up there and return without losing your mind and breaking your car in half and then do it again to do it the next week or the next month. That’s what it’s all about Jeff says.

Todd’s channel below and also Jared Rusk’s of the documentary filmed in 2017 at Walker Valley Offroad Park.